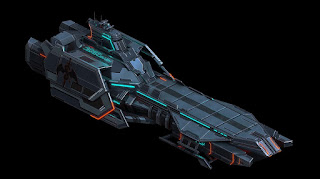 As many know, I've been trying to test the new 117 FM target as my Inferno Dragons build and see if anything pops up.

Rum Runner and Padre Prince were kind enough to run a few of the tests for me concurrent to my own testing. They'll confirm - this is a pain and pricey!

That said, I have gotten a fleet out. I'm not sure it's a 'best build' though. There were some assumptions I made that were not completely accurate when tested and there are some wonky results that make some of the selections questionable.

That said, what I'm going to do here is go over the build and the theory behind it and then some observations about the target and hopefully it will help you decide which way you want to build your fleet and perhaps find a better combination, because I'm about burnt out tweaking this fleet.

(Currently I am running this build EXCEPT I have replaced the ES4 special with Lowered Explosive Mount.)

This is the Huggy's link for the build.  I'm still toying with a few things and I believe that rank on this hull is absolutely essential. This has hurt me in testing because I just didn't get them ranked fully during the VXP weekend. For now, let me explain the build as it sits. There are 2 pairs of hulls in this fleet and both run on the same theory.

This is the Huggy's link for the build with the Savage lead.

Two hulls have Front Line Counter Measure. Originally this was for two purposes. The first was because I was running a Sprint on 2 of the hulls.

As most of you know, I run the Phalanx and Sprint ranges in such a way that the Phalanx would have priority for firing. In this target that might not be all that important as the primary missiles do not seem to have flak evade.

I also found that if I kept the fleet moving, the use of Gales in those spots mitigated more damage than when I ran the Sprints. Weird, yea?

That said, the second purpose is one that seems to work fairly well. Offsetting the firing of the Gales. With one pair firing at a further range, it allows for a bit of overlap in the reloads while the other two hulls use Siege Battery 4 for increased building damage to help my Time To Kill (TTK), which works well because of...

As we covered in a previous article Spread and Splash - A Story of Co-Dependence we reviewed how spread and splash work and their interaction. Given the strength of the walls I wanted my design to focus as much damage as possible where I hit. For that I needed low spread and high splash - exactly opposite of what the rocket inherently has.'Stock' values (15 splash, 150 spread) are a Coverage Efficiency of 25% and a Damage Density of 12.5%. This build (32.5 splash, 75 spread) brings that up to 108% and 54% respectively. Think of it as 'focusing' your rocket damage.

What the numbers don't reflect however is that at target point, 100% of every rocket will have the splash radius overlapping said target on the inside of the 50% splash mark ensuring optimal damage at the target point.

What that really means is that every time a rocket lands, more of the 'inner circle' of splash damage (damage drop off is linear remember) covers the spread area increasing the damage done in that area allowing me to kill an intended target much quicker, which enabled me to forgo rocket reload and...

I use Mag3 in place of the special that was released with the hull. Again- I do not know if this is the 'best' build- it's just what I've built. The reason I wanted Mag3 was that, initially, it seemed as though we would not be able to shoot down all those mortars, which have YUGE splash and spread, so I wanted to be as far away from them as possible when they landed so I was at the tail end of the splash radius. It also allows me to mostly outrun the coldsnaps.

One thing I did note when using Mag3 over other options was that it changed my targeting on the incoming mortars so that I had a better chance at firing at the tail end of the mortars rather than waste all my salvos on the first ones out- which had a better chance of falling away from me and causing less damage. I don't know if I'm paranoid, but it looks like the first half of the volley of mortars fires with less spread than the last half of the volley. I'll try and test that out in the future.

Given how dependent this hull is on rank, one possibility for a build would be to add another Gale or two which may mitigate more damage that this current setup. Unfortunately, I don't know how that would affect my TTK on the turrets, but if the additional Gales can counter all the mortars, you may be able to run RF-X engine instead and bring the TTK back to the same area. If I hit the lottery and can refit to this idea, I'll test it and report back, or, if anyone is building this fleet in the article and wants to test that for all of us, please let me know the results!!

This one is a very interesting conundrum. On first blush I was very tempted to go with AA3 because of the mortars. What I've found through testing, particularly when you have a full complement of armors, is that AA3 is the worst of the three. Counter-intuitive? Yup.

The other two have yielded some interesting results. They seem to be performing neck and neck when running a Dragon fleet. One will outperform the other by small amounts and they also perform differently in different positions in the fleet (which interestingly enough- is repeatable often).

What gets really interesting is when you run a Savage flag. In that instance, the MX3 reliably outperforms the RA3. Again counter-intuitive. One would think if the Savage reduced the projectile damage a significant amount that the RA3 equipped hulls would clearly outperform the MX3 hulls when running just Dragons. Instead the biggest disparity I've had between the two specials was about 600 damage. Typically they have been around 50. This is another area where improvement can be found.

Needed? Yes. I found that 3 Charged X and 2 Charged M was the happy balance point in testing. I tried a few other configurations and did not find a better combination. If you plan on running a Savage with the fleet you may be able to toy with this as well, but I'd hate to have to refit AGAIN once the Flagship comes out.

As I mentioned above, I forewent Sprints and rely on speed. I'm running only 2 Phalanx 4's in the fleet. Between the remote targeting evade and semi-decent driving I'm finding that even with the occasional 'oops!' in the target the 2 Phalanx work fine which lets me load up on the Gales. I do run 2 Gale 2's though just as another offset cushion to the reload of the Gales. 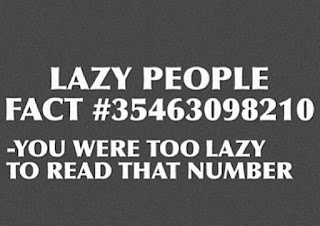 I hate to say this, but this is easily the most refit and tweaked hull I've had to play with. That is not good. Part of the issue was, and is, the large changes in performance and mechanic interactions with the addition of rank and charged armors. What was working early in the build, did not work later when there was some rank and armor. This is a very poor interaction for the player and thought should be given when designing a target and hull. Unless there is some avenue in which to test builds out, players will be chasing down poor build paths until the 'final', and planned, interactions become clear. I think part of this issue is that the targets are tuned for full ranked hulls (which mine are not as yet) and testing is done on final versions and no thought or planning was given to the interim time a player spends with the fleet and target. It may be an oversight or something that never manifested in testing but should be looked at in the future when developing targets and hulls.

The other aspect that troubles me a bit is that this seems to be exactly what many players complain about - you have to have a top flight build in order to perform even acceptably. Many players complain about the complexity involved in building a fleet and that for many targets you have to have the 'perfect' build in order to succeed or a degree in math to understand what is happening. This target reflects that sentiment.

If you haven't gathered yet, I am not 100% confident in this build because the damage still seems too high given the application the hull is intended for. I know I don't come up with the best builds, but generally speaking, I think I come up with acceptable performing designs and am confident in those designs. This one sets my teeth on edge for some reason. Perhaps because I can still see many items/ideas I'd like to test or possible flaws in my analysis. We'll see... 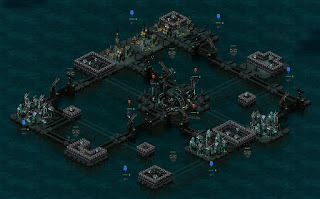 The 117 is, as everyone is aware, a new target and not at full strength yet. This is worrisome given the damage I'm taking and that I will need at least 7 (SEVEN!!) of these targets to fully complete an FM mission when there is even 1 new item added into the Tier 5 Prize Pool (~3.5 million points). I am less than amused. If this were a target where I could do 3 and be done, perhaps the damage would be appropriate, but as it stands now, given that the target is not at full strength, I do not think the payout is appropriate for the anticipated damage output of the target. 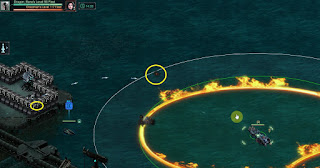 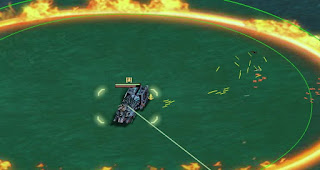 Another new twist is the insane projectile speed and flak evade of the mortars. A picture is worth a thousand words and the picture above does that and more. What makes it even more vicious of a mortar is the insane splash radius and spread of the mortar with no appreciable splash damage fall off.

The target itself is also a fairly good sized target. With the ECMs in place, it certainly is not a blitz target like we expected when we saw the Inferno Dragon. This does sadden me some, but, you can still blitz it and with the hull's native Remote Targeting Evade you don't get dinged up too badly, sort of, but certainly not what I'd consider acceptable, particularly given how many I have to do to complete my FM. 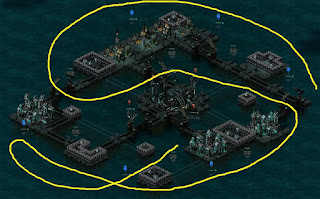 The path - this is where I think improvement likely can be had. I think once we find the 'right' path some of this damage may come down. For now, this is the path I'm using and when I go into the target I target the opposite side mortar (you can see me doing this in the video) so the turrets get targeted and killed as well as the Mastadon before I go through the next gate. You can watch the video here:

And I've added a video of a run with the Savage. Hopefully after this VXP weekend I'll get some runs done with full VXP on the fleet and see how much this improves...


I hope this helps some of you finalize your builds and helps you succeed in the new FM targets. I wish I had some more time to write more, but alas, I do not.

If you find something that works well or any good tips or tricks, feel free to post them in the comments, on the video or on the TFC page for the community to see. Good luck fellow pirates!
Posted by anisixia at 4:35 PM