This is not the cannon you are looking for...

The Dark Side: We Had Cookies - Ren Ate Them All

A long time ago in an ocean far, far away... no... no, that's been done too much. Anyone hear the joke about Vader, the Pope and a cookie? Neither have I.

Everyone has been waiting. Since the Malice came out with no weapon, we have been waiting on a new cannon and special. This was exacerbated during and after the raid with the release of the Cannoneer. Many expected one weapon for both the Malice and the Cannonner since Siege can fit hand in hand with Base hitting. I covered the Cannoneer and my speculation about a new cannon (and builds) in this article.

New to the Forsaken Mission this week, we have the long anticipated cannon and special... or do we?

I really wanted to make a Jar Jar Binks joke about this cannon, but I really can't, as it actually is pretty damn good for its apparent intent. It is not, however, the cannon we all wanted or expected. Let's review the new cannon a bit and see how it stacks up to what we have. 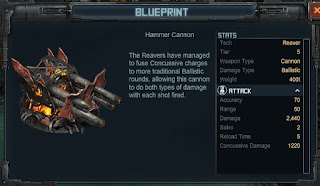 At first blush, this cannon seems fantastic- and it is, if we are talking specific PvP (player vs. player). Unfortunately, I think that's about all it will excel in for now- and even then, only with few to no walls.

To begin with, it is not a dumbfire weapon like the D-110 Railgun (the de jour PvP cannon if we can call one that) so it can 'track' your targets and actually relies on the stated accuracy percentage in order to hit. This is huge for a PvP cannon (particularly in Fleet vs. Fleet battles), not so much for a  PvE cannon for Siege based targets.

The D-110, as well as the Arbalest, Crossbow and Earthshaker cannons, are not accuracy driven, as they are dumbfire weapons- meaning that they are aiming at the point where the enemy was when the cannon fired. Much like the Fire Twister torpedo, projectile speed and/or angle of attack is a heavy consideration in the use of these weapons for PvP.

This is important since players have been building fleets with higher combat speeds making dumbfire weapons far less effective. This characteristic of the Hammer alone makes it King of the PvP choices now- Well, PvP that doesn't involve walls. This thing is going to SUCK at walls.

Add to this the brutal DPS of this cannon and a lot of people may want to think about swapping any cannons currently in their base guard, in place as Malice deterrents, to this cannon.

This isn't the cannon you're looking for:

This brings us to PvE use and why I am trying to Jedi mind-trick you into not using it on your Cannoneer/Zelos/Centurion.

I am going to interject here with this statement: I am presuming that Kixeye released its 'skill based', top tier hull for the next raid cycle knowing what Kixeye had planned for those targets and designing the Cannoneer appropriately. In other words, I am extrapolating information about next months targets from information we can glean from the stats of the new hull designed specifically for the next Raid Cycle as the top choice, skill based hull.

That said, I think it is pretty clear we are going to have some walls. Heavy, massive, pain in the ass walls. The Hammer is going to SUCK at walls. I mean it is going to suck as much as vacuum jokes do. That bad.

In addition to this (because I know someone is going to say - 'Dude, it's ok, the Cannoneer has +50% wall damage') the Hammer has no mechanic to do additional damage- either Splash or Pierce. With this cannon you are only damaging one thing at a time, and not as well as other cannons when it comes to buildings and walls. The Earthshaker has Splash and the D-110, Crossbow and Arbalest all have Pierce. The latter three also have significantly higher wall damage than the Hammer as well as that Pierce mechanic that can mow down walls several at a time.

Additionally, when dealing with siege targets, I am going to presume turrets. Call me paranoid, but have you seen the Health of our new turrets? 1.2 million units of health. The hammer may have a pretty damn good DPS for building damage, but not for it's weight as compared to the Shaker. Cracking into those walls is only half the puzzle. What you can do afterward is just as important. I do not see this as a viable replacement option currently in the role that the Shaker fills in current conceptual builds.

So, that all said, I hope everyone can see why I think this is NOT the cannon you should be expecting to use in next months siege targets and they should be selectively used in PvP targets as they have a pretty obvious drawback.
Posted by anisixia at 1:25 AM